I contacted Pandit Amarnathji on his contact. Number 7508377002 by seeing positive reviews for him, to get directions to my problems, but unfortunately he is not able to resolve it after 5 months, he guaranteed me that the problems will be solved in maximum 15 days, but he was just giving. Fake assurance, and later he stopped receiving calls, As per his website and reviews. He was seen as quite knowledgeable but he does not seems too, taking a good chunk of money, he is fooling people, also he has one software guy through which he changes negative reviews given against him. Please be careful before trusting such people. On their reviews. His Account. Details. Are attached. 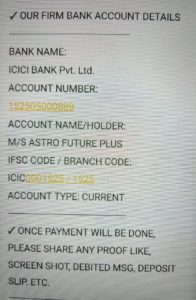 Post your reviews / feedback or experience by clicking on the following submit complaint button.
Frustrated?